The Minister of Interior has decided to issue an Immigration Permit to third country applicants in pursuance of the provisions of Regulation 6(2) of the Aliens and Immigration Regulations. The permanent residency permit shall be obtained when the following conditions are satisfied: 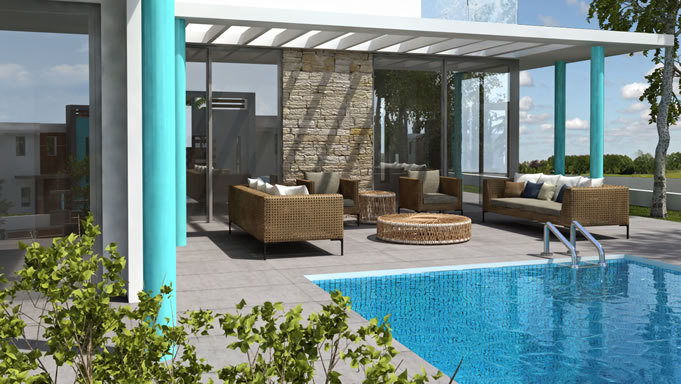 The applicant should submit a confirmation letter from a financial institution in Cyprus that he/she has deposited a minimum capital of €30 000 into an account, which will be pledged for a period of at least three years. It must be proved that the said amount has been transferred to Cyprus from abroad.

The applicant should prove that he/she has at his/her disposal a secure annual income of at least €30 000. This annual income should increase by €5 000 for every dependent person of his/her family (spouse and children) and by €8 000 for every dependent parent or parent in law. This income should derive from abroad, and may include salaries from employment, pensions, dividends from shares, fixed deposits, rents etc. For the calculation of the total amount of the annual income, the spouse's income may be also taken into consideration.

The applicant should submit, together with the application, title deeds or a sale contract in his/her name and/or his/her spouse, which has been officially filed at the Department of Lands and Surveys, of a real estate, of total market value of at least €300 000 (V.A.T. is not included therein) and official payment receipts of at least €200 000 (excluding V.A.T.), irrespective of the delivery date of the real estate. It should be stressed that the full payment of the real estate value shall be settled in an account in a financial institution in Cyprus. The above mentioned amounts must be proven to have been transferred to Cyprus from abroad.

It is noted that the real estate purchase may be accepted even when made in the name of a legal person, provided that the applicant and/or his/her spouse are the sole shareholders or the ultimate beneficial owners of it, and that this legal person is legally established in the Republic or other member state of the European Union or European Economic Area.

For the purpose of implementing this policy, the applicant may purchase up to two housing units (apartments or houses), which can be independent, but be purchased from the same development company, or one housing unit and a shop of a surface of up to 100 sq.m., or a housing unit and an office of a surface of up to 250 sq.m., provided that the total market value satisfies the conditions of total market value of at least €300 000 (V.A.T. is not included therein) and official payment receipts of at least €200 000 (excluding V.A.T.). In the case of a couple, these restrictions apply for the couple and not for each of the persons involved.

The said purchase must be in relation to a property (and the combinations described above) sold for the first time by a development company. In the case of acquiring two dwellings, both must be sold by the same development company. As from 7/05/2013, for this policy, applications in relation to the re-sale of dwellings will not be accepted. It should be stressed that sale contracts in relation to a re-sale of dwellings that have been officially filed at the Lands and Surveys Department prior to 07/05/2013 (the date of filing the sale contracts is to be confirmed by the Department of Lands and Surveys), shall be accepted for implementing this policy.

It is noted that the alienation of the purchased property without an immediate replacement with another property, of the same or/and higher value and in accordance with the conditions of this procedure, (i.e. sold for the first time by a development company), will result to the cancellation of the Immigration Permit pursuant to the provisions of Regulation 6(2) of the Aliens and Immigration Regulations.

The Immigration Permit issued to an applicant covers his/her spouse and children under the age of 18. Two separate Immigration Permits may be granted to each spouse, if desired, provided that a separate application is submitted, and the relevant fee is paid, without being required for the other spouse to satisfy the criterion of the purchase of a property, the secure annual income and the deposit in a financial institution in Cyprus. Children under the age of 18 may be included as dependent persons in both Immigration Permits with the payment of the relevant fee.

Unmarried children aged between 18 and 25, who prove that they are students in an institution of tertiary education abroad with at least six months of remaining study period from the date of the submission of the application and, furthermore, that they are financially dependent on the applicant, may submit a separate application to obtain an Immigration Permit with the payment of the relevant fee. In such a case, the father or mother and/or both parents together must present an additional annual income of €5 000 for every such dependent child. It is noted that every such dependent child, shall submit with his/her application, all the documentation defined in the relevant list.

The said permit is still valid even if the holders have exceeded the age of 25 years old and even if they do not remain unmarried and/or students and/or financially dependent on their parents. It is noted that their future spouses or underage children cannot be included as dependent persons on this permit.

If children wish to study in an institution of tertiary education in the Republic, they have to submit through the institution an application for acquisition of a temporary residence permit in the Republic as students, according to the provisions of the relevant legislation (EU Directive). After the completion of their studies in the Republic, these children regardless of their age, will be able to submit their own application to obtain an Immigration Permit, as it is described above, with the condition that their parents present only an additional annual income of €5 000 for every such child.

Applicants who were granted an Immigration Permit without satisfying themselves the conditions of the acquisition of real estate in the Republic, the secured annual income and the deposit in a financial institution, are not allowed to include in their permit their spouses, children and parents.

Investment of a Higher Value for the Inclusion of Children who are not financially dependent:

Provided that in such an event each child shall submit the necessary documentation with his/her application (e.g. secured annual income of €30 000, a deposit in a financial institution in Cyprus amounting to €30 000, which is bound for 3 years).

The applicant and his/her spouse must submit a confirmation of a clean criminal record from their country of residence or from Cyprus, in case they are residents of the Republic, and generally they should not be considered as a threat in any way to the public order or public security in Cyprus.

The applicant and his/her spouse shall confirm that they do not intend to undertake any sort of employment in Cyprus. It is noted that the applicant and/or his/her spouse may be a shareholder(s) in a Company registered in Cyprus, and the income from the dividends of such a company in Cyprus are not deemed to be an impediment for the purpose of obtaining an Immigration Permit.

All the necessary documentation that is attached to the application for an Immigration Permit, including the translation of the same into the Greek or English language, must be duly certified.

Procedure for the Submission and Examination of an Application:

Applications accompanied with the required documents must be submitted directly to the Civil Registry and Migration Department (CRMD), personally or through an authorised representative. A government fee of €500 is payable with the submission of each application.

Applications that are submitted through authorised representatives must be accompanied by an authorisation letter from the applicant stating the particulars, full address and contact number of the representative.

The Ministry of Interior shall notify the applicant or his/her authorised representative and the CRMD as to the decision of the Minister of Interior.

It should be stressed that, provided the criteria of this policy are satisfied and there are no reasons with regard to either the criminal record of the applicant or to public order and public security issues, the application shall be examined by the Minister of Interior in a positive manner and an Immigration Permit shall be issued.

It is estimated that the procedure described in this policy statement for the examination of the application shall not exceed two (2) months from the date of the submission of a complete application.

● Documents required for the acquisition of the Cyprus Permanent Residency